This is from last week pre-teeth-floating, pre-farrier, and still in the middle of a nasty heat cycle.  While fussy to the extreme you can see her high levels of coordination as compared to last year.  Also these were a solid 2'3" (well two of them were) and she does it easy peasy.  At one point she cantered through a new vertical, she was convinced the sand bit her, so Sprinklerbandit was nice enough to beef up its appearance and Diva sailed right over.

I've got so many things to update about, but this post is all about Bridger.  In typical horse fashion he is trying to make a liar of me.  All last fall I was saying things about how I didn't think he was brave, should probably just do dressage, not thinking he was the horse for me, blah blah blah.  Well I didn't ever actually get him listed and thought I would this spring.  The hubby kept saying he thought Bridger would be nice and I should give him a chance (lots of husband points here for wanting me to keep my oversized herd and not pare it down).  Well I've been getting him going again now that the winter tundra is gone and thought what the heck I will ride him over these logs.  OMG!  Mister spaz pants who can't focus on anything seems to love jumps!  It is like he sees a jump and his brain cells all line up in a jumping row. 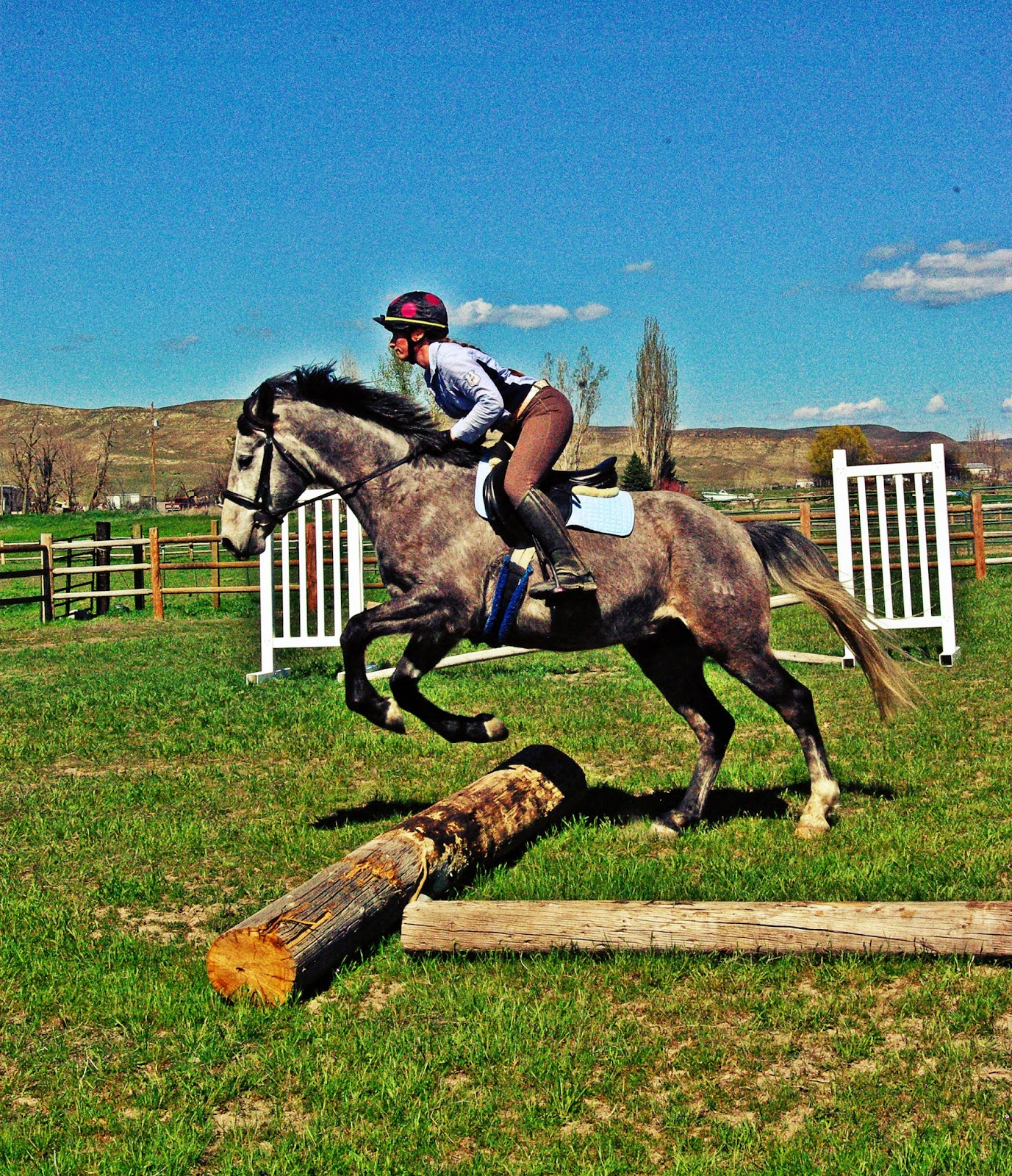 I know it is nothing spectacular form wise, but I'm actually more impressed that he can casually canter over it and not launch into orbit.


Like a duck to water, Bridger seems to love the jumps, can't wait to see what he will do.
Posted by redheadlins at 10:39 PM 8 comments:

As I mentioned before, Sunday was awesome!  Alyssa came to the track and we groomed and hung out.  Then we ran back to my house so I could so a little homework (boo) and grabbed some lunch.  Then we headed to the barn for all the riding.

I rode Gigi first and she was great, I took her to the fancy dressage barn for a lesson on Friday (where she of course decided to act like a redhead) and we continued to work on things from that.
I was actually quite pleased with the lesson and the instructor worked us hard and was very complimentary of what I've done with Gigi.  We even did some trot half pass that she told us was perfect, yay!  This mare has the most incredible lateral work in the trot, and her canter is finally getting strong enough to work on a little there as well.  That stronger butt is also helping her trot lengthenings.  One weak spot we are working on is the free walk to working walk transition.


After Gigi, I tacked up Miss Priss (Diva).  She started out much more amiable than the day before, but still very much in heat.  We walk trot cantered and she was forward and more consistently on the bit.

Then we started jumping.  The only one she hesitated at (but still went over) was a cross rail with placing poles in front and behind it.  She got up to the jump and was all 'what is that pole doing over there?'  After that she was game, and more coordinated than last year.  I look terrible over fences on her, lots to work on there.

I will start putting the fences up for her as she doesn't even have to try with her long legs.  She can literally just trot over a large cross rail.  We also did two small verticals, one with a black tube under it and one with flowers under it.  Diva picked up this cute slow canter towards several of the jumps, I think she actually has an easier time figuring out her timing in the canter.

Monday I rode her again (no pictures:( this time) and tried sprinklerbandits kk bit on her.  She has been fussy and I just wanted to try a few things.  The main thing I need to try is getting her teeth done.  Anyways she seemed to really like it to start and then she didn't seem to like it, lots of fit throwing.  Between fits she again jumped quite well.  Sprinklerbandit and I were discussing Miss Priss and came to the conclusion that the beautiful bridle I've had on her the last few rides (also sprinklerbandit's) may be causing some of the strange head issues.  She usually goes in a figure 8 which eliminates pressure along many of her teeth where as the crank (which is well padded and not that tight) goes right over the top of them.  So if she is already having teeth issues the crank isn't helping.  Back to the figure 8 it is, until the vet comes and floats her teeth.

Thanks to the amazing Alyssa for all the amazing pictures!
Posted by redheadlins at 10:06 PM 4 comments:

Here I am again, another week has flown by!  I'm finally done house sitting, while I enjoy the scenic place I was taking care of, a full two weeks is a long long time.

School keeps chugging along, I even got a 96.5% on a biochemistry test, nerd.

I brought Diva over to the barn where Courage, Gigi, Gunner, and Zida all live on Saturday afternoon (for a week or two of arenas and jumps) and Alyssa came with.  It ended up being a really fun time and then plans were made for an epic pony day for Sunday!
This is Diva's first trip anywhere since last December and she was a total superstar (unless you hold being in heat against her).  I was planning on a light ride, but she started off about a mile behind my leg and all sorts of pissy (darn-it spell check that is a word).
So we worked on big forward loops around the arena and then figure 8's and then she started to settle.  There were a few standing breaks thrown in and she was the best at those.


Her canter is so much more balanced this year and even starting to get more uphill.  The joys of being 17hh and a late 5 year old (her birthday isn't really until the end of next month) means that body awareness still leaves a lot to be desired.  She also took exception to my right leg and so thought that the right lead canter was an impossible feat.
Shoulder fore in the trot around the arena several times fixed our suppleness issues, but she still didn't want to canter right so I went back to the left lead for a few circles.  The left lead felt so nice that I cut across the arena to swap to the right lead (since lead changes are expected of racehorses everyday on the track) and BAM right lead.  Then she stumbled, lost it, and picked it up again.  Everyone cheered.  She was being so good I even popped her over a little cross rail and she was perfect.  Over all it was a great ride and she even got foamy between her butt cheeks (only horse people can say this with a straight face).

By what you ask?  Two posts in two days!  Here is another quick post about the second half of last Wednesday.  After galloping I did some riding and was then planning to haul Alyssa and her horses to a photo shoot.  Turns out there was a rainstorm out that way so the shoot was cancelled.  That meant I got to take Zida to jump night.  Wasatch Sport Horses puts on 'jump night' every Wednesday and it is an affordable way to haul out and jump.  While she doesn't call it a lesson, it is still a mini lesson.  I haven't ridden over there since that icy December ride with Diva.
Last fall and into the winter I really started working to polish up my riding.  I was stuck in that green horse ride, while not terrible I knew I could do better.  So, while the ground was snow covered I watched videos of great riders over fences and doing dressage.  I rode in my mind and tried to make every detail perfect.  I'm a true believer in visualization helping to form your reality, low and behold my back is flatter, my leg is longer, my eyes are up.  Yes there is still much to work on, but I feel like I'm on the right track.


The first line we came down I kept Zida super straight as we landed I heard Steph yell, 'I would have bet money she wouldn't be straight through that, and I would have lost.'  To which I said something along the lines of 'I love winning!'  Throughout the ride she pushed me to ride better and better.  By the end she told me she was impressed, she was convinced that my galloping at the track would wreak havoc with my position and was happy to be proved wrong again.  I told her I was really working to not let my different styles of riding mix together in a destructive manner, and that I was working to improve my galloping skills as well.  Again she mentioned seeing my most recent galloping pictures and being impressed.  At that point I was on cloud nine and grinned for the rest of the evening.  She isn't one to sugarcoat things or blow smoke so three 'you look greats' in one night pretty much made my week.
Posted by redheadlins at 3:28 PM 18 comments:

Others enthused by horses